The motto of the Department of Vascular Surgery, The University of Tokyo is “treatments based on scientific evidence”. This evidence is derived from research. In modern Japanese medical history, our department has published a lot of research results and is recognized as a front-runner in the field of vascular surgery. Based on the evidence obtained, we are convinced that we are applying it to clinical treatment.

[Summary] Currently, there is no method to control the dilation of aortic aneurysms. We have continued research on ways to prevent rupture of aortic aneurysms without surgery. Aortic aneurysm models in rats have been available since the 1990s, and there have been a series of reports that various drugs could be effective for preventing the dilation of the aneurysm “in animals”. However, there are no reports on the effectiveness of the drug in humans. The dose of the drug might be too high to be safely administered to humans.

To reduce the dose of the drug, we encapsulated it in nanoparticles and administered using the drug delivery system. The nanoparticles then stay in the relatively structurally coarse inflamed wall of the aortic aneurysm, where they release the drug. We succeeded in preventing aneurysm dilatation by using nanoparticles containing a drug called rapamycin (anti-inflammatory drug). There are still some points to be addressed, such as confirming the toxicity of the drug in humans, before it can be applied in clinical practice. However, I believe that in the near future, the “medication” option for patients with a high risk of aortic surgery will be chosen.

[Summary] Symptoms of intermittent claudication in patients with peripheral arterial disease can be improved by exercise. It was speculated that the improvement may be due to the increase in collateral vessels; however, the details have not yet been clarified. We analyzed the 3D movement during walking in patients with claudication using “motion capture” before and after the bicycle exercise. In addition, we measured the volume of muscles related to walking movement using CT. As a result, we found that the efficiency of walking was improved by increasing the muscle strength of the lumbar region and thigh, and reducing factors such as the expansion of the range of motion of the hip joint and maximum muscle tone. We assume that this novel finding will help the exercise program improve and be more scientific in future. 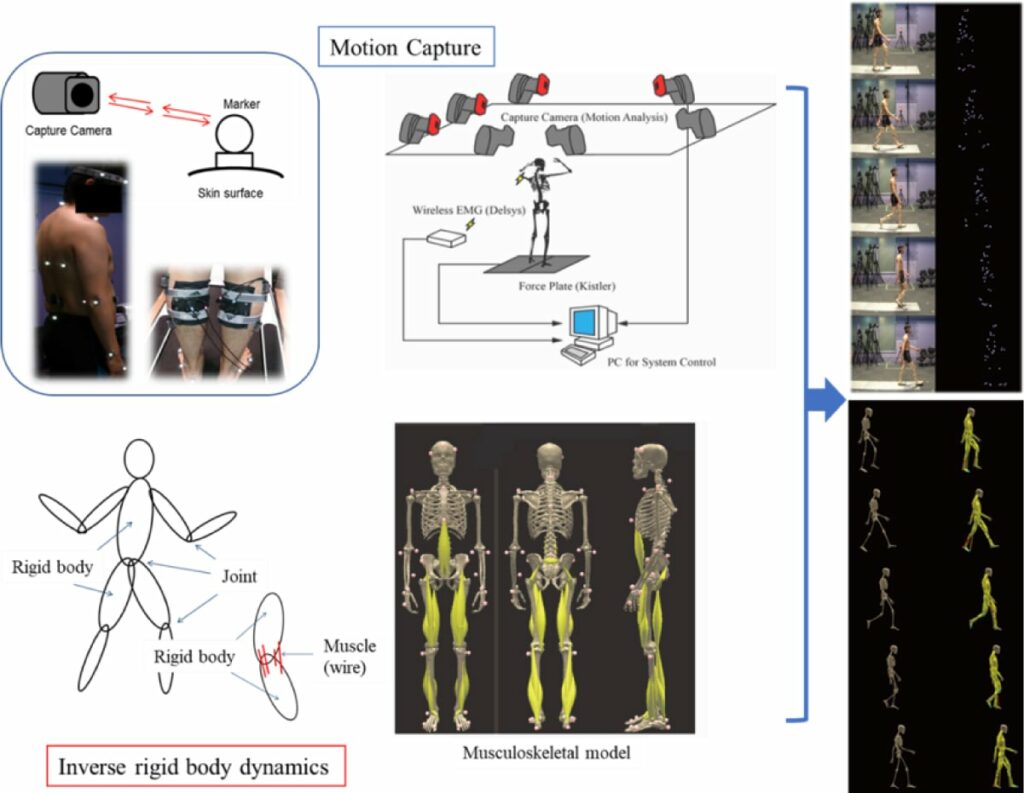 What is a “saccular”?

[Summary] The diameter of the aortic aneurysm is the most important factor for surgical intervention. The shape of the aneurysm is also an important factor. Saccular (protruding) morphology is believed to have a higher risk of rupture than the fusiform shape. However, even small aortic aneurysms were sometimes operated under the diagnosis of “saccular” aneurysm. Interestingly, how was the “saccular” aneurysm diagnosed? We suspect that there were some patients with aortic aneurysms that were diagnosed as saccular and underwent surgery, but could have been diagnosed as fusiform by other doctors and actually have little risk of rupture. In such cases, were unnecessary operations performed? In the era of endovascular treatment, it has become easier to perform surgery, and it seems that small aneurysms with less risk of rupture are being treated. Surgery is the last resort. The judgment of such important morphology related to the surgical intervention should be strictly and scientifically determined.

The definition of “saccular” has never been scientifically defined. In our department, we created a model of aortic aneurysm and proposed a definition of saccular aneurysm. One definition is “the protrusion ellipse (aneurysm) is horizontally long.” When combined with the actual aortic aneurysm data, we found that the saccular aneurysm group according to our definition had a significantly faster expansion rate. We should pursue evidence with the Medical-Engineering Collaboration, which is under the responsibility of the Aortic Aneurysm Simulation Study Group. 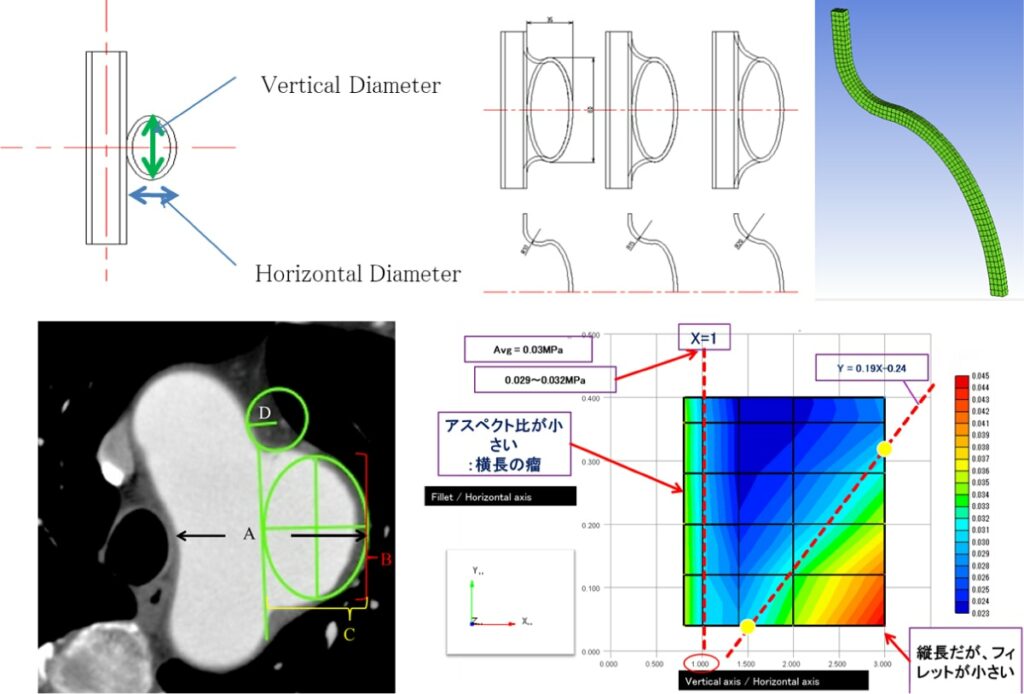 Application of the hybrid gel for the artificial graft

[Summary] In Japan, the number of patients with chronic renal failure who receive hemodialysis therapy is increasing each year. AVF creation is the first-line of blood access for hemodialysis. Regarding AVF creation, failure of vessel maturation, stenosis, or occlusion of arteriovenous anastomosis sometimes occurs. The primary patency at 1 year after creation is 60%–65 %, which is one of the worst outcomes in all vascular surgeries. The cause of these failures is thought to be attributable to veins rather than arteries. Few studies have targeted veins in the field of vascular biology, and the detailed mechanism of maturation and failure has not been elucidated.

In Dr. Dardik Lab in the Department of Vascular Surgery, Yale University, to which our staff had belonged, we researched the process of adaptation of veins to the arterial environment using two models of AVF. The AVF model of mice was created and the results were presented by our staff (See figure). We collaborate with Dardik Lab and aim to clarify the molecular processes peculiar to AVFs and to improve the results of AVF surgery through further research. 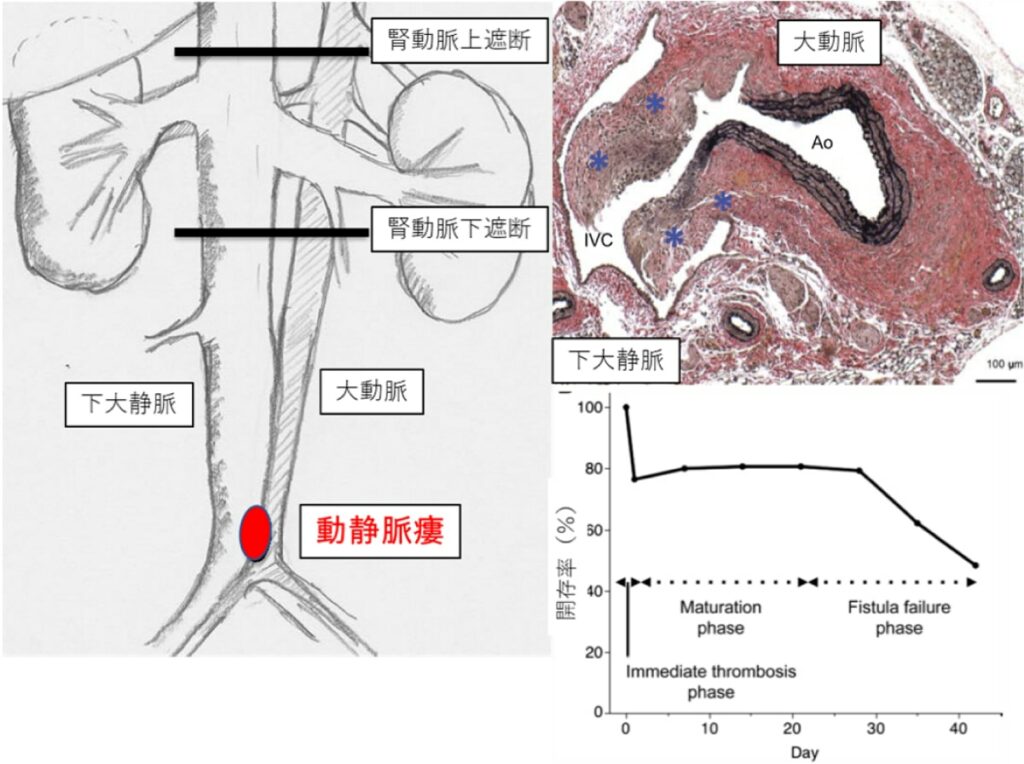 Clinical and basic research in our department